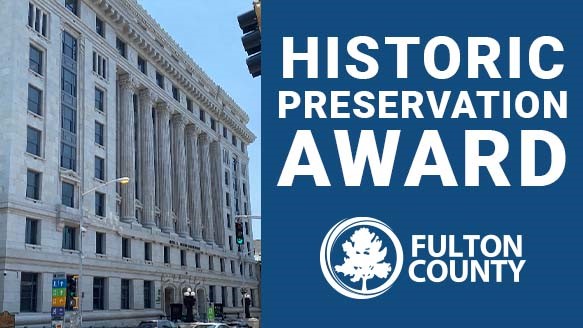 Fulton County has received a distinguished honor. The Façade Restoration completed at the Lewis R. Slaton Courthouse was selected for an Award of Excellence for Historic Preservation by the Atlanta Urban Design Commission. The award was presented the 2022 Design Awards on Tuesday, May 17, 2022 at 55 Trinity Avenue, Atlanta, GA. 30303.

“Receiving this news was an absolute honor not only for the entire county, but the residents we serve,” said Fulton County Manager Dick Anderson. “Everyone who worked on this project, from the construction workers, to the architects, and designers are truly artists who were dedicated for more than 18 months to ensure that the courthouse was not only visually appealing, but structurally sound. This represents a huge improvement to the Fulton County Courts’ image and experience to all who frequent the Courts complex”

“All those involved in the restoration took great care to design sensitively around the existing structure,” said Department of Real Estate & Asset Management Facilities Program Manager Bill Mason. “The application process to apply for the award was eagerly completed as we worked to share information about the design and photos with the selection committee. This award is a testament to that hard work and our continued commitment to improving the County’s judicial system and facilities.”

The $19 million project, which began in June 2019 involved the full façade restoration of all exterior
elevations of the historic, nine story, 275,000 square foot Courthouse. Scaffolding was erected along the courthouse after ornamental molding made of terracotta detached from the building and fell to the sidewalk. Skilled craftsmen also cleaned, repaired, and replaced cracked and failing terracotta and granite on the facade fixed exterior leaks to improve safety for pedestrians traveling near
Courthouse and eliminate water intrusion into the building. The roof was also replaced with slate to provide long-term protection. Following the removal of the scaffolding, workers refinished the entry ways, handrails, ornamental lamps, and clean remaining granite stains.

The Lewis R. Slaton Courthouse was constructed between 1911 and 1914 and was designed by noted Atlanta architect A. Ten Eyck Brown. It was listed on the National Register of Historic Places in
1980. The building fronts on Pryor Street and Martin Luther King, Jr Drive and is part of a justice complex that includes two other buildings. The project was completed in August 2021.