This week, many from the county and state justice system came together to wish Chief Judge Brasher a happy retirement. It was a heartfelt, and bittersweet, gathering of many who admire and appreciate the judicial temperament he brought to his 17 years on the bench.

As colleagues from the bench, the Atlanta City Council, Fulton County Commissioners, State Supreme Court, past and present staff, and many others came up to the podium, one by one, to pay homage to him, it was obvious that he is not just respected professionally, but that he is also truly loved by all those he calls family.

Thus, it’s fitting, on his last week as a sitting Superior Court Judge, that we close with Part II of the in-depth and insightful interview that Judge Richardson did with him this fall. You may read Part I HERE.

Q: Was there anything else about being Chief that surprised you other than having to deal with Covid?

A:  I think what equipped me was a lot of my previous experiences we talked about before. For example, one of the jobs that I had at the AG’s office was I had to defend the method of execution, both before the transition to lethal injection and afterwards. This meant that I had to go to a fair number of executions, and those are not the most pleasant things to witness in the world. This also meant I would be hailed into federal court, with a 2-3 hours’ notice, needing a prepared written product, ready to argue it; this was a daunting thing.

“I think this prepares someone to remain calm when difficult things come calling. I think being in dynamic situations, like G8 and the Tristate Crematory case, while I’m not going to draw a straight line between those, it certainly prepared me to keep my head when things started going sideways. I was glad that I had those past experiences when I had to face this.”

During yesterday’s retirement party for Judge Brasher, we heard from former Chief Justice Melton, who explained to the crowd of well-wishers, that the work that Judge Brasher did not only meant that Superior Court of Fulton County NEVER closed during Covid, but that the other courts around the state that chose to follow his lead, also never closed. Other Superior Court Judges echoed the sentiment that they were grateful that it was Judge Brasher in the role as Chief Judge when Covid came calling as he had the temperament to answer the call to be a leader among leaders in crisis times.

As Judge Brasher thought about other surprises he encountered, he ruminated on speaking for the Court and “the balance needed to make sure one is not getting out over their skis”. He explained that at times people would express that some issue should have been talked about before and that while he always tried to be very upfront, there were still times he had to apologize for a mistake he made and ask folks for their forgiveness, while also pledging to do better. When he would have to answer tough questions, he would ask himself, “would at least 10 of my colleagues agree with me if I said this?” While he didn’t want to make policy decisions on that basis, the reality was that if he was in front of the County Commission, he had to be able to do just that.

He mentioned his initial surprise at how willing the County Commission was to listen to the court if approached in the right way…though he also acknowledged that he didn’t always know what that right way was. He went on to explain that Superior Court Judges are state employees, embedded in a county court system, where everyone else is a county employee; it’s a system that doesn’t have a lot of guideposts for it.

“I’ve been pleasantly surprised with the reaction we’ve gotten from the county commission when we go to them earnestly and are forthright with them. I think, if we’re willing to have a conversation, if we’re willing to say I respect your position and your input, and we’ll try to address that…you can do that without compromising the separation of powers.”

Q: After serving on the bench for 17 years, what do you think you will miss the most?

And my staff because they’re both my family and my work family.

I’ll miss my colleagues on the bench, and having the kind of communication you do with people who have shared the same experience with you…there’s a level of camaraderie that occurs in those circumstances that doesn’t happen elsewhere.

I’ll miss the idea that I’m in a role where I can really help people and make people feel better about the justice system.

Q: If you had a few minutes to chat with an incoming Judge to the bench, is there any advice that you would give him or her?

A: I think the first thing is that everybody has to figure out their own style and what works for them.  When I used to coach mock trials for high school students, what I told them was “there’s no wrong way to argue this case, there’s just your way. And you have to believe it, and you have to do it”.

I’d also say to an incoming Judge, “give yourself the grace to understand that you’re going to make mistakes and that you’re going to struggle”. If someone were a trial lawyer or a strong advocate lawyer before coming to the bench, I’d tell them that “you’re going to struggle to step out of that advocate role, everybody does. You spend your time thinking, well if I was doing that, I’d do it this way and not that way.  But you must step out of it. You’ve got to give yourself some grace as you do it and expect it to take a few years.”

“And the last thing is just keep going. I always joked that the number one rule in Fulton County is: Here’s your shovel. Don’t stop shoveling. The cases are coming. Other things are coming. You’ve got to make decisions and move on.”

This is not a shield against not doing it right, but encouragement to make decisions and move on.  I learned that I made better decisions when I did that; if I didn’t ruminate over them and outthink myself.

Q: Are there any words of encouragement or advice that you would give the incoming Chief Judge?

A: Well first, I’ve known Judge Glanville for quite some time, a 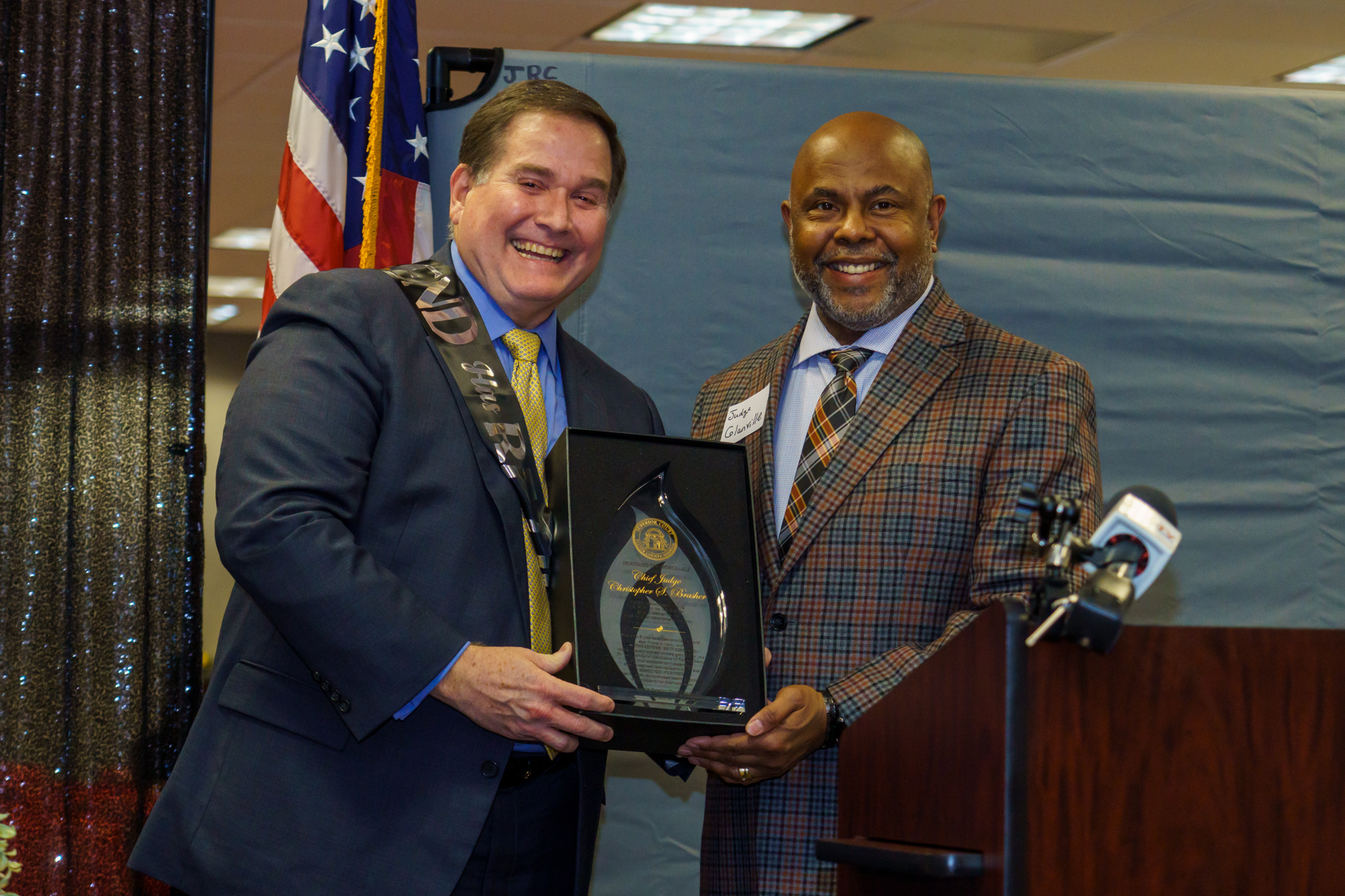 nd I wouldn’t be so presumptuous as to tell him what he ought to with this leadership position as he’s had leadership positions of his own over the years. I have no doubt that Judge Glanville will do a great job, we are blessed to have him.  As a citizen of Fulton County, I’m glad that he’ll be our next Chief Judge.

The encouragement I would give him is to just continue to be a calm presence, a knowledgeable presence, encourage people to do their best in the places where they are, and to bring people along who are desirous of having leadership roles. I’d also encourage that we maintain the best relationships we can with the external entities that we must remain in touch with, to try and retain that leadership position we’ve built and should continue.

Judge Richardson closed out the interview with this statement to her colleague and mentor:
“As a fellow member of the bench and as a citizen of Fulton County, I want to let you know how much we appreciate you, all that you have done for the State of Georgia, for Fulton County, and for Superior Court.  We are going to miss you very, very much.”

And as Judge Brasher ends his final day as Chief Judge on the Superior Court bench, we are all the better, and safer, for having been led by his calm and knowledgeable presence.

You will be missed Chief Judge Brasher and we wish you a truly wonderful retirement!